So recently (2 weeks back) I watched a quaint little anime titled “Acchi Kocchi”. Now this anime is quite popular in and out of Japan, so popular that it’s ranked as #426 in terms of popularity, which, mind you, is above other anime like Tokyo Ghoul (#500). So I was certainly curious as to why this show was so popular and was recommended by so many people. Needless to say i went in with high expectations. 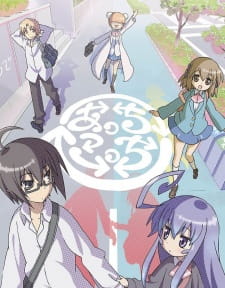 Feelings may come and go, but true love always remains in the heart. Tsumiki Miniwa is in love with her best friend, Io Otonashi. For her, confessing is nearly impossible; but to her friends, they seem to be the perfect match. Cute and petite,... 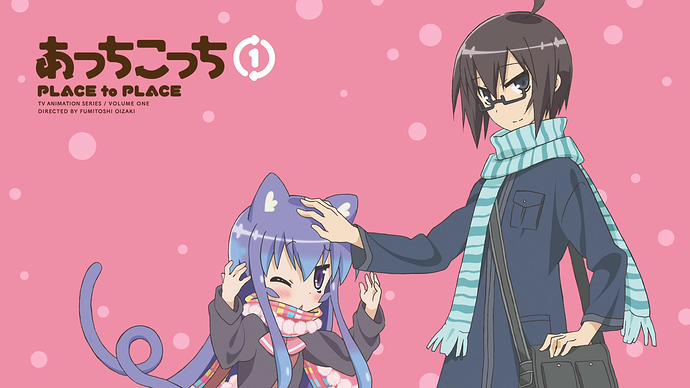 Story :
Now the plot of Acchi Kocchi is … oh wait … there isn’t one. The story follows protagonist Tsumiki Miniwa, who is in love with her best friend Io Otonashi. So a picture a typical romance setting with a dandere/tsundere female lead. Now i usually find dandere girls to be quite timid and boring, so I was quite surprised when Tsumiki turned out to be EXACTLY that. More to the point, as i mentioned before there is no real plot or story but rather we are treated to the daily interactions between Tsumiki and her friends. This type of storytelling is commonly found in slice of life anime and since this is a slice of life anime it is to be expected but somehow Acchi Kocchi manages make everything so tedious that it makes you detest the slice of life genre itself. Therefore the story or lack thereof might turn away a few people because the anime itself is not engaging enough to captivate the viewers attention from episode to episode. One other misgiving is that the anime lacks a certain sense of completion, even after you watch all the episodes you still might leave this show feeling unfulfilled or unsatisfied. This is mainly due to the fact that the story has no final goal, no “we should achieve this before the anime ends” or something like that. So as far as story goes, I believe that it isn’t a particularly good one. Thus the level of thought that has gone into writing this anime is apalling, you definitely can’t expect a brilliant story and unexpected plot twists seeing a this was adapted, originally, from a yonkoma manga but nonetheless when you’re adapting something into an full-length tv anime you should definitely put in more work than what you find in Acchi Kocchi,

Another area that this anime fails is in giving it’s characters depth. The only person in the anime who felt alive was Io, whist his character lacks depth as well at least he’s actively doing something worth watching. Furthermore all of the supporting characters are simply put in this anime to narrate whatever is going on, if Tsumiki is being uncharacteristically tsundere someone will comment on it, if Io is being a romantic someone will comment on it. Its rather the sad to look at these supporting characters and see them do nothing that is of actual value to the (non-existent) plot. Furthermore the supporting character don’t really contribute to the development of the main character, which is fundamentally the reason that supporting characters exist. Therefore I must say that i found both the main and Supporting characters extremely 1-dimensional and mind numbing to say the least. Delving deeper into individual characters we see that characters don’t really have any sort of reason for why they are, what they are. By this of course i mean that the writers haven’t given the character a past which in turn translates into poorly constructed characters. For example. we aren’t told why Mayoi loves inventing things and is into tech and gadgets. Nor is it ever explained how or even when Io and Sakai actually became good friends. Both of which are forgivable since they aren’t really important characters or relevant to the (nonexistent) plot but what i find unfathomable is the fact that neither Io’s nor Tsumiki’s past and how they met is never revealed to us either. So in terms of characters very 1-dimensional.

But on the contrary the only character that i liked in the show was Kana Miyama, known by most as “the green hair girl”. What’s weird about this is that even though I bitch about character development for the last paragraph I like this one character despite the fact the has she has no past, no explained character relations and just randomly shows up halfway through the series. Just the voice-acting (Konno Hiromi) alone was amazing but they go beyond that and create a truly lovable character and top it off with a great character design. Maybe she simply speaks to the lolicon in all of us or I’ve been moe-baited but either way she gets her own paragraph.

Nothing special from AIC Build

Afterword: there was more stuff that i planned to write but due to laziness I quit…

Every story don’t need to have a plot. There are some really good anime that don’t have any plot too.
Like Yuru Yuri, Lucky Star, Azumanga Daioh, Working!, Nichijou.

we can see that the popularity rank don’t mean anything. Boku no Pico don’t particularly have any good plot, whereas Yuri Kuma has an intriguing deep plot, amazing symbolism with some amazing plot twists. The reason why it’s popular is that people enjoyed to watch it more. It could be due to the art style, the relatability, the calm feeling you get when watching moe-goodness and such.

PS: I agree that Kana is best girl too!

First of all comparing this anime with the likes of Yuru Yuri, Non Non Byori, Luck Star and other more recent works like Kono Bijutsubu ni wa Mondai ga Aru is unacceptable and ,frankly, at an fundamental level is redundant because the above mentioned works all have one thing in common that is “PROPER CHARACTER DEVELOPMENT”. What it lacks in terms plot is nullified by two things: genuine comedy and character development. So even if the plot is not going anywhere the journey of the characters give the audience the sense of progression throughout the anime. This anime on the other hand is not providing either of the above mentioned thus it was quite a mind-numbing experience. But I can see why some people (everybody on MAL) can like a show like this. And let’s face it everybody needs a little bit of mind-numbing form time to time, maybe I just didn’t watch during one of those times,