Hey everyone, so I just finished playing Saya no Uta VN and it was damn good(Its from Nitroplus so I didn’t expect anything short of greatness), anyone who hasn’t played go play it now, its a “bit” echchi and has extremely violent themes but has a compelling story so play it at your own risk this one will definitely f you up. But the problem is I haven’t been able to find other works like that. So i was wondering if anyone had any VN that are similar to Saya no Uta or just any VN recommendations in general. 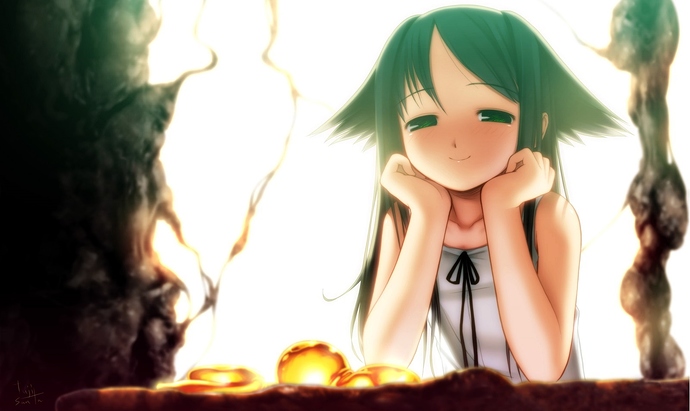 Steins;Gate and Steins;Gate 0
???
I loved it but that maybe because I love the anime and Kurisu but try them they are great

I’ve played very limited no. Of VNs
Have u played Fate?? … If not i strongly recommend it and currently im playing rewrite

I played Rewrite but haven’t really played Fate but Ive heard its good.

Definitely will do man. but its like 50 hours isn’t it??

I would like to mention Planetarian - chiisana hoshi no yume. this one differs from usual visual novels that there are no choices for you to make and no alternate endings. instead you sit there and read. it’s what’s called a kinetic novel. this was developed by Key and as you would expect the story is amazing and very heart breaking. there was 5 episode anime shorts that also released after the VN. there is also Kanon and Air, but both are adult visual novels and

if you are into them you can read them too. also made by key.

Thanks man I’ve played all of them except fate and planaterian. Also does the overall appeal some how decrease or is the story shorter in the anime??

is this about planetarian? or fate?

overall appeal… it depends on you largely. and story is the same as what’s written in VN albeit few differences. i urge you to first play the VN and then watch the anime.

Okay man thanx for the rec, having trouble locating a source tho

http://erogedownload.com/downloads/planetarian/ here you go. it also got the patches.
http://store.steampowered.com/app/316720/ if you can legit buy it.

Well its a pirates life for me so…

I finally checked out Planetarian my god it was good! Thanks man.

i’m glad you enjoyed it. :’) it’s one of the most enjoyable VN experiences out there.

Have you played Saya no Uta?