This thread contains spoilers.read at ur own risk

wew.I intially dropped bleach because it seemed to be going on forever.but once i learned that its final is close.i picked it up for nostalgia’s sake.Afterall this too was part of our childhood.

u can clearly see/feel that Tite Kubo was rushed when reading the last chapters.
and the battle itself felt out of place to me.like wth just happend? 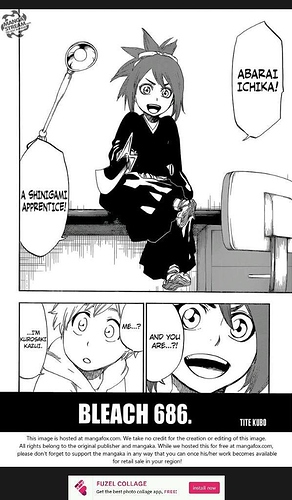 Aite, sorry for the late reply.

I loved Bleach. I really did. It gave the world some of Anime’s most iconic fights and villians EVER.
Ichigo vs Grimmjow/Ulquirra . To this day, those remain as some of my favourites. Not to mention Aizens betrayal , etc .
I find it unfortnate that Kubo couldnt tell the story like he wanted, that things got dragged out.

Kubo must have had Ywach as the big bad for a long time, because he introduced Quincy’s as a race that opposed the shinigami. Thus the final antagonist had to be a Quincy , right?
I think Kubo focused waaay too much on the side chars, and then had to rush to an ending that feels so inconclusive.

WHERE IS GRIMMJOW NOW?

there are way too many questions to be answered .

Regarding the pairings, saw it coming tbh.
Didn’t know Shinigamis (dead ppl/reapers) could have a child ( a new life? )

Overall, it could’ve ended better, but nothing is perfect. (except Rem)
Bleach took us on a great ride that we can never forget .
Thanks, Kubo

Too nostalgic!
Stopped the manga a long time ago, maybe I should finish it now that it’s over

Apparently there may be a small spinoff to clarify the missing holes I mean Kubo ain’t dumb he knows when something is unfinished. I am kinda waiting for that and hoping it won’t be like Boruto. (Boruto didn’t hit me quite as well as a spinoff should be

yeah but i hear he was sorta pushed into ending the manga.

Awwwww I feel bad for him

He must have had a nice way of ending :((

I would assume that Bleach wasnt selling well. Jump needed Kubo to end it.
I wonder what will take its place though. hmm

“what would take its place”? Chlorine. Ba-dum-tss

Bleach was at the bottom of the shounen jump rankings for years now, i think the only reason it didnt finish earlier because of its past as one of the “big 3”