"classroom of the elite " light novel 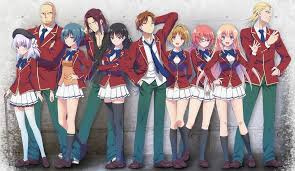 well…it’s better than nothing.ongoing series.i enjoy it very much.
Kōdo Ikusei Senior High School, a leading prestigious school with state-of-the-art facilities where nearly 100% of students go on to university or find employment. The students there have the freedom to wear any hairstyle and bring any personal effects they desire. Kōdo Ikusei is a paradise-like school, but the truth is that only the most superior of students receive favorable treatment.

The protagonist Kiyotaka Ayanokōji is a student of D-class, which is where the school dumps its “inferior” students in order to ridicule them. For a certain reason, Kiyotaka was careless on his entrance examination, and was put in D-class. After meeting Suzune Horikita and Kikyō Kushida, two other students in his class, Kiyotaka’s situation begins to change.
one of the famous light novels in japan.so far 10 novels been released.
The way main character acting behind the scenes is awesome.

I feel really weird replying to a 9 month old post…

For a certain reason, Kiyotaka was careless on his entrance examination, and was put in D-class

This is not true. Kiyotaka didn’t actually intended to be put in the D-class as he didn’t know the school’s Grading system at the time of the ntrance Exam, He just wanted to be out of the spot light. He’s a student with exceptional skills at his disposal. So it’s only natural for someone like him to get famous in school. But Kiyotaka didn’t want that. So he intentionally lowered his score; getting exactly 50 marks in every subjects; though he dismisses it as a pure coincidence.
Kiyotaka is a very calculative person and i don’t think someone like Kiyotaka would get careless and make a mistake.