I am really sad and confused to know that the second season of Arslan Senki is over in 8 episodes… does anyone know why it ended in 8 episodes ? and will it continue again ? or is it just taking a break ?? 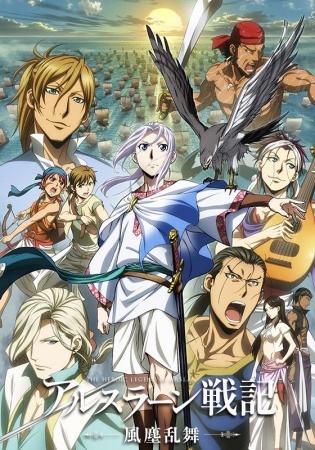 It was announced even before it started aiings hat itkl have only 8 EPs.I dunno y tho.hopefully it’ll get another season.

really ?? from the start they decided on 8 episodes … i hope this doesn`t become a thing cuz anime is already too short with only 13 episodes …

Yeah, that was soo bad TT_TT especially since it got 2 cours last time… But like everyone said, it was announced before hand… and well, the reason why they did is pretty obvious - since they didn’t announce split cours or two cours, they couldn’t cover that huge cliffhanger in only four more episodes

he really did look cool at times, like when he forgived uhh Shagad was it

that was such a twist
But exactly cause of that, not gonna accept any other queen for arslan xD
On another note, the manga is waaaay behind as of yet (the scanlations at least) so can’t read what’s happening next T_T I don’t think I wanna read the novels, and there aren’t translations anyways prob owo

by the way wat do u mean by this ?? is the anime gone past the manga ? or u mean the manga still haven`t revealed who will marry arslan ??

also do u know who arslan`s real parents are ?? this is the biggest mystery in the story and not knowing this has being eating me away from inside

Ahh, first yes, it’s based off a novel series. The author is actually the author of the famous Legend of the Galactic Heroes… Know that one?

And Arakawa Hiromu, the mangaka behind FMA has adapted it into a manga

that’s the manga I’m talking about. The manga is ofc ahead of the anime… Just that the scanlations of the manga are lagging behind… They’re still at the Arslan vs Hermes arc’s start

Uh, I hope I was clear enough lolol

umm srry to ask this but wat is scanlations ?

and hermes is OP only mardanfu mardan can defeat him

and again i would like to ask u since u have read the manga … have they revealed wats the scandal behind arslan and his origin ??

Um, scanlations is just scan + translation… Basically how you read the manga online in English? It gets scanned, cleaned and typeset in English by translator fan groups

I guess you just didn’t know the word, I’m sure you know the process

And as for the question of Arslan’s parents, nope, like I said… The manga chapters currently translated are still at episode 15-20 (I don’t remember exactly) of the first season… It doesn’t follow a different story line, so not yet. I don’t know anything either owo sorry

dam !! i guess we have to wait for another season in order to know who arslan`s parents are …