This was the first anime review I ever wrote (which I posted on my naver blog a couple of months back) so I might be a bit rusty here and there. I don’t follow a standard format and I’m not very used to focusing on details. I just write how the anime made me feel. Anyways, enough with excuses. I really hope that a lot of you must have seen this and if not I will tell you why I consider this anime one of the hidden gems! 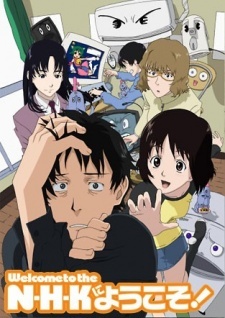 How I came across this anime was when I was looking for animes that would motivate me to study.

Yes. Honestly. And Welcome to the N.H.K. was what was recommended by most on several different forums. At first I wasn’t sure why it was so. It seemed to be loved by everyone who has ever watched it but it wasn’t known by many, and as I started watching it I realized that it has this strange motivating capability. No it has nothing to do with students or studying. But It’s because this is almost as if you’re watching yourself or maybe a part of yourself. You start encouraging Satou, the protagonist, a socially withdrawn college dropout, to accomplish things in life, that you start reflecting back on your own.

The story revolves around Satou Tatsuhiro. An unemployed 22 year old college dropout in Tokyo who lives off the allowance he receives from his parents. Although those aren’t exactly my living conditions Satou Tatsuhiro was one anime character I could absolutely relate to, being somewhat a Hikikomori myself. But what does “Hikikomori” mean? Hikikomori is a Japanese term that speaks of acute social withdrawal shown by adolescents or adults who always seek extreme isolation. So yes, the protagonist is the utter definition of “Hikikomori”.

The image of Satou lying on his futon surrounded by beer cans, his ashtray loaded with cigarette butts, tied up trash bags at every corner of the room and his faithful refrigerator, computer and television keeping him company through the entire day will be one of the most common scenes in this series.

But his life takes a turning point when he meets Nakahara Misaki a mysterious girl who appears out of nowhere, offers him a contract saying that she will cure him from his “Hikikomori” state. The story then revolves around Satou and Misaki along with Yamazaki Kaoru, Satou’s neighbor and high school junior. Be it Satou and Yamazaki working on taking over the world with their very special project, be it their curious adventures, be it them questioning their life’s choices this story is immensely enjoyable and pretty realistic(atleast that’s how I see it).

The story has plot twists. But I can assure you that these plot twists will only make you get attached to the story even more as they are sometimes the most unexpected or the most wonderful occurrences that take place in the anime.

As for the characters and their traits, I’ll start with the protagonist Satou Tatsuhiro. Satou is an extremely lazy overthinking anxious young man who is also unemployed and never leaves his studio apartment. He is one of the most realistic anime characters I’ve ever come across. Why he is such a relatable character is he mimics real human behavior in all those given situations in the anime. He has desires, he fears great many things, he tries out many and fails at many. He suffers from major social anxiety and this condition is very cleverly depicted in the anime and plays a major part in talking to the viewers about the character that is Satou Tatsuhiro. Meanwhile Nakahara Misaki is a mysterious character. No one knows who she is, where she comes from until later in the anime. She is innocent and is thoroughly determined to cure Satou and is prepared to succeed in it by any means necessary. Satou’s Neighbour Yamazaki Kaoru plays an equally important role in building up the story. He takes part in “adventures” together with Satou almost always and doesn’t hesitate to knock some sense in to Satou’s head whenever necessary. All in all, the characters are much similar and much different from each other the same time.

To be honest the anime is drawn crudely at most times but it doesn’t fail to depict the situations clearly. The fact that it’s very realistic not only when it comes to the occurrences but also it pays attention to very little details like how each character dresses, makes up for the drawing style.

The background music is incredible! I was pleasantly surprised by the fascinating guitar sequences that are played from time to time. As for the opening and ending themes, this anime has two opening themes. the first one “Puzzle”, sung by ROUND TABLE featuring Nino, has a refreshing intro. The second opening theme is a remix of the first one. But to be honest I’ve always skipped the OP because I was impatient to see how the story unfolds. The first Ending however, was my absolute favourite. The intro got me hooked up on it and I’ve listened to it several times and I’m still not over it! The name is “Odoru Akachan Ningen” sung by Otsuki and Kitsutaka. The second ending theme “Modokashii Sekai no Ue de” sung by Yui Makino is absolute sweetness!

Welcome to the N.H.K has been one of those animes that gets you deeply attached to the characters and the story line. I got so emotionally attached to the characters that whenever they start doing something questionable I couldn’t help but scream at my screen or laugh out obnoxiously whenever Satou starts blabbering about conspiracies or let out an evil chuckle at his misfortunes. This is a great, hilarious, wonderful, realistic anime and it is one you will surely watch again!

Yo fellow hikikomori… Nice review, one of my fav. anime…

Very Nice and extremely detailed review! You touched on everything that made this anime a masterpeice of its genre. As I’m also an avid fan of NHK ni youkoso I thought it would be appopriate here to write a few paragraphs comparing this and another one of my favourites -steins;gate. Hopefully this will further encourage any steins’gate fans to give this anime a try if you haven’t already!

I came across NHK ni Youkoso when I was searching for anime similar to Steins;gate, right after finishing it. I was fascinated with Steins;gate because it blended a lot of Time Travel Sci-fi jargon with with a deep emotional plot with heavy psychological elements. Okabe Rintarou’s odd nature and his slow descend into madness as he was desperately trying to save his childhood friend by time leaping many times completely going against the norms of society somehow appealed to me more than I cared to admit at the time. And so, while desperately searching for an anime with a similar setting and a set of characers NHK ni Youkoso was reccomended quite a few times, but as I read ths sypnosis it seemed to have nothing in common with steins;gate, it did not seem to contain an Sci Fi elements nor a deeply emotional story, but having exhausted all other options I finally decided to give it a try, and needless to say this was one of the best decisions I’ve made.

As with the case of Steins;gate, NHK ni Youkoso starts off slow and mundane. We are introduced to a hardcore hikikomori with a severe case of paronia named Satou Tatsuhiro. At first glance Satou seems to be a more exreme case of Okabe but as you go deeper you begin to realize that they’re infact quite the opposites with a similar ‘surface’ personality.

Okabe acted like all crazy like a mad scientist to cheer up those around him and to make his life and lives of those around him more interesting and different from boring reality although his misadventures take a dark twist and he’s burdened with the task of saving those he love as well as the whole world, having to deal with cruel betrayels and slowly starts going insane from all the preassure.

On the other hand Satou is not faking it. From the beginning itself it becomes clear that he really is afraid of the outside world and really thinks that some orgaization is tracking his every move and is out to get him. He’s a college drop out who over time developed these feelings and cannot go back now. NHK ni Youkoso follows the adventures of Satou and a mysterious girl who claims that she can cure him, as well as his neighbour and hardcore otaku Yamazaki. NHK no youkoso too picks up speed towards the latter part when several plot twists make the before comedic plot take on a very pscychological and philosphical tone. We’re gradually taken into a very breathtaking climaxes- infact one of the most well executed climaxes-I’ve ever seen. The romance was also spot on and served in making the final conclusion all the more touching and satisfying.

All in all NHK ni Youkoso is a must watch if you’re into psychogical anime and if you have enjoyed anime like steins;gate before, there is a good chance that you will absolotely love this too.

being somewhat a Hikikomori myself

Haha, this was actually one of the first anime that made me realize that I actually might be a hikikomori.

I’m sure you did! it’s one of my favourites!

@twonline Thank you!! I hope to get better in writing reviews. It’s one of my favourite animes too!

Thank you! I’m glad you found it a detailed review!

And wow! That is a wonderfully written review of the anime! I totally agree with you on the climax being well executed! But if I tried explaining how I felt about it more I’m sure to drop some spoilers so I’ll stop at that

I must say that your description of steins;gate really piqued my interest and since these days I’m finding it hard to settle on one anime to binge watch I guess I have found exactly what I should get hooked up on! Thank you!!

So I’ve finally finished watching Steins;Gate (Still am to watch the movie and the specials except Steins;Gate: Oukoubakko no Poriomania ) and I thought I’ll talk about it here.
This anime was a huge emotional roller coaster for me with all its plot twists,the emotional trauma Okabe goes through, how intense certain situations were and how much I got emotionally attached to the characters!
This is sure to be one of my most favourite animes and I’m really happy that I finally got to see it!
Although this is an entirely different story from that in NHK ni Youkoso, there was some familarity I felt that I couldn’t ignore. I think it’s majorly because of how alike Okabe Rintarou and Sato Tatsuhiro are. Mayuri was such a sweetheart and Kurisu quickly climbed up my list of favourite anime characters! All in all I can say that this anime will surely be one of my all time favourites!

Glad you enjoyed it! And agreed Mayuri and Kurisu are such interesting heroines, So is the rest of the cast.